The Ajmer city of Rajasthan is situated on the shore of Ana Sagar Lake and one of the most popular pilgrimage centres for both Hindus and Muslims. Ruled by many rulers of Mughal era, it was later controlled directly by the Britishers. However, for most of the tourists, Ajmer holds a very strategic importance as the city is flanked by barren hills and historical monuments. The major places of interest in Ajmer are the Dargah Sharif, Adhai-Din-ka-Johnpara, Ana Sagar and Foy Sagar, Akber Fort, Roopnagarh Fort, Nasiyan Temple. 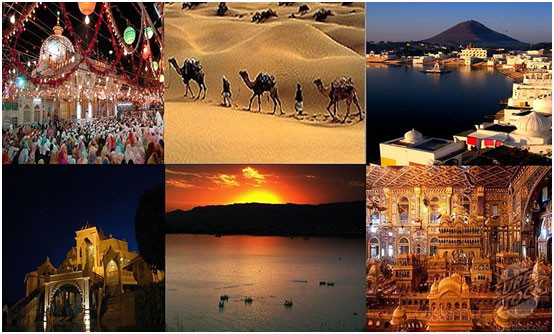 The Adhai-Din-ka-Johnpara is a Jain temple constructed in the year 1153. It was later in the year 1193 that Qutubuddin Aibak converted it into a mosque. Built in two and a half days, it was named as Adhai-din-ka-Johnpara. It has forty columns that support the roof. The sculptures of this mosque are beautifully carved by the Hindu architectural styles.

The Akber Fort in Ajmer was built by Akber in 1570 and known to be one of the strongest forts of southeast Rajasthan. Surrounded by two thick walls, the fort houses a double-storied palace which is again surrounded by a row of columns. In the center of the palace, there is a large hall providing routes to the number of rooms around it. As compared to other forts, the Akber fort is relatively small in size, but has an marvelous structure that attracts every tourists visiting the Ajmer city. 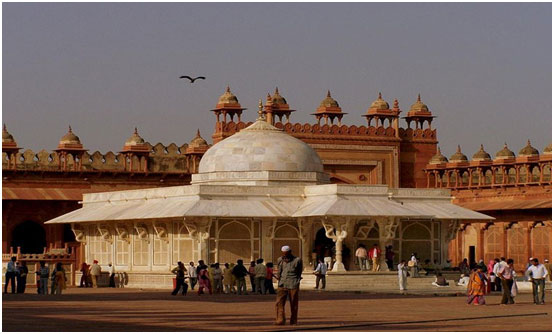 The Dargah of Khwaja Moin-ud-din Chisti at Ajmer Sharif is one of the most important Muslim pilgrimage centres in India. This pious place is visited by people of all faiths to fulfill their wishes. Situated at the foot of Taragarh hill, the dargah consists of the Akber Masjid, a mosque, several white marble buildings, a tomb and a massive gate. The buildings are arranged around two courtyards with erected pillars. Apart from Muslims, people from all the religion offer velvet cloth, perfume, flowers and sandalwood at the shrine for fulfillment of their desires.

There is also the famous Roopnagar Fort consisting of nine turreted forts carved with miniature paintings. This has now been restored and renovated into a hotel.

The Nasiyan Temple is a Jain temple and popularly known as Lal Mandir due to its color. It depicts the Jain mythology and also called as Digambar Jain temple.

The Ajmer city of Rajasthan is situated on the shore of Ana Sagar Lake and one of the most popular pilgrimage centres for both Hindus and Muslims. Ruled […]
Do you like it?0
Read more
Categories

Bundi is located in the southern Rajasthan and known for its interesting monuments and fascinating cultural heritage. Located about 35 kms from Kota, this place is […]
Do you like it?0
Read more
Categories

Located in the heart of the Sahyadri hills near Aurangabad, Maharashtra, are the most beautiful rock-cut caves of India, the Ajanta and Ellora caves. Hewn into […]
Do you like it?0
Read more
Categories