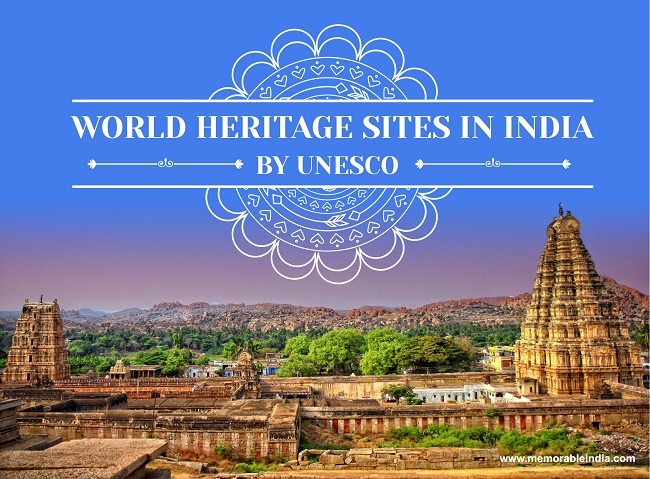 This is the 2nd part of the series UNESCO World Heritage Sites in India, Read 1st part here….

The beauty of India lies in the fact that its extremely diverse and has every possible geographical variation within itself. The Kaziranga Wild Life Sanctuary is a testimony to that fact.

Nestled in Assam, this amazing natural forest is home to several animals, plants and birds. Famous for its one-horned rhinoceroses, this sanctuary has acquired the title of UNESCO World Heritage site.

The project was taken forward by Lord Curzon who decided to protect the Rhinoceros of the region. The park is flanked by the beautiful Brahmaputra River making it more amazing. The entire forest is covered with streams and lakes that make it even more serene and calming. This park has done a fabulous job in protecting endangered species, and you will be mesmerised by the sheer variety of plants and animals here.

Located in Mahabalipuram, these temples were built during the reign of Pallava rulers. These temples have a unique feature- they were all carves out of ricks and are a part of the Ratha architecture in India.

This site consists of some of the most amazing art of the Pallava Period especially if you visit the sites like Pancha Rathas, Dharamaraja Ratha, Arjuna Ratha, Draupadi Ratha, and many more. Don’t forget to visit the Cave Temples of Mahabalipuram which constitutes of a labyrinth of caves all of which make up for a fascinating visit.

This dense mangroves forest is both fascinating and dangerous at the same time. One of the largest mangrove forests in India, this forest is located in West Bengal. A simple boat ride through the forest will help you see the beautiful mangroves the flank the sides of the river, and make it look so ethereal.

The Sunderbans is famous for its Royal Bengal Tigers, and if you are lucky you will be able to spot one of those majestic beasts just lurking around in the shadows.

Staying at this amazing UNESCO World Heritage site is an experience by itself. The atmosphere is spooky as the entire forests get covered in darkness and all you can see are giant trees just looking down on you.

You also spot other animals like Gangetic dolphin, spotted deer, wild boar, and other mammal and amphibian species.

Built by Begum Bega, who was the first wife of Humayun, this tomb has attracted visitors from far and wide. This monument has gone through several restorations to make sure that the glaring beauty of it is still alive. The Tomb is nestled in a complex which has other smaller monuments. You can visit these monuments if you are on a historical day tour to Delhi.

This astronomical wonder shows how forward-thinking ancient India was. Located amid Rajasthan, this observatory was built by King Sawai Jai Singh. It is essentially a park which consists of 19 astronomical tools all of which have a certain kind of aura to them. Along with the installations, you will also find a board explaining how each works. These instruments were used to calculate celestial coordinate systems, the horizon-zenith local system, the equatorial system, and the ecliptic system.

Close on the heels of the beautiful Taj Mahal, lies another wonder- Agra Fort. This extremely strategic and important Fort was also built during the Mughal era when Akbar was on the throne.

The art style of the Fort reflects the usual confluence of Persian, Timurid and Indian style of architecture. A tour through this monument will liven up your imagination and you will be able to imagine the past life that used to inhabit this.

Many say that when you go inside this colossal structure you will still feel the presence of the Mughal rulers that once roamed here, such as the atmosphere of this lace.

This place is named after the victory of Akbar over Chittor and Ranthambore, and it consists of four main monuments- the famous Jama Masjid, the awe-inspiring Buland Darwaza- it is said that the wood for this door was imported from Australia, the Panch Mahal- which is said to be the birthplace of the famous Navratnas of Akbar and Diwan-e-Khas and Diwan-e-aam.

Through the Buland Darwaza, you will be led to the Tomb Of Salim Chishti, which gives out a strange positive aura.

The Ancient Indian Architecture is reflected through the Rani Ki Vav in its full galore. It was erected during the prosperous time of Solanki Dynasty and it is believed to constructed in the memory of Bhimdev 1.

The Rani Ki Vav acquired the status of  UNESCO World Heritage site in 2014. The wonder of this structure is the unique architectural marvel and beauty.

The complex is famous for its picturesque rustic Stepped Corridors, sculptures and carvings on the wall- all of which make this place extremely popular among the tourists. The carvings are devoted to Lord Vishnu who is depicted in 10 avatars, making this place highly spiritual as well. This place has used storage for water, and the stepwell here is splendid. You just sit there, take some lovely photos or just contemplate how life must have been at that time. The carvings weave a wonderful tale, and the inverted temple structure of this place makes it spiritual and religious.

19. Group of Monuments at Pattadakal, Karnataka

The rich history of South India is depicted in full frenzy at the Pattadakal in Karnataka. This site is mostly known for its exemplary monuments, many of which are built in the Chalukya style of architecture. The beauty of this architecture is the blend of different styles like- Nagara and Dravidian. You will find at least eight temples here dedicated to Lord Shiva and Jains. This very fact shows how diverse the region must have been, with two faith coexisting harmoniously.

If you choose to visit this UNESCO World Heritage site, then make sure to visit monuments like- Virupaksha Temple, Sangameshwara Temple, Chandrashekhara Temple, MallikarjuTemple, Kashi Vishwanath Temple, Jagannath Temple, among many more temples in Karnataka. All these monuments are important sites in history and are architectural marvels that will leave you enthralled.

These chain of caves located on Elephanta Island are exceptionally fascinating. These caves are a great study of the past of India since they are home to several archaeological remains and ruins. All of these artefacts housed at the labyrinth of caves and provide an insight into the rich past of India. The beauty of these caves are the rock-cut figurines and sculptures that are so detailed and life-like.

The caves are dedicated to Lord Shiva and carry several sculptures and paintings from his life. The moment you enter the caves you will be greeted by the Sadashiva, which is the depiction of the three sides of Shiva- The Creator, The Preserver, and The Destroyer. Just touch the walls of the caves and you will feel history coming alive.

Continue to Part 3 of UNESCO World Heritage Sites in India