God’s own country Kerala, renowned throughout the world for its beauty and the backwaters. One of the top tourist destinations in India. Yearly millions of tourists visit Kerala for sightseeing, Pilgrimage and to spend their leisure time relaxing in the houseboat in the midst of coconut trees and the greenery. The capital city Thiruvananthapuram is well known for its history and the world’s richest temple, Anantha Padmanabha Swamy temple.

Near to this historic city, at a distance of 52 km lies this amazing architectural marvel. The Jatayu earth center situated in the Chadayamangalam village in the Kollam district of Kerala. The World’s biggest bird statue is located on the Chadayamangalam hills at an altitude of 350 m from the seas level. When you visit this historic place you will witness four hills. First the Jatayu Rock hill in which the world’s largest bird scripture constructed. Another other is the Adventure rock hill, Elephant rock hill and the last but not the least the kitchen rock hill also know as the Heli Tour hill.

How to reach Jatayu Earth’s Center?

The nearest airport to this place is Thiruvananthapuram, from here one can hire a taxi and reach this architectural marvel. To reach the Jatayu rock hill one needs to hop in the cable car. The view from this place gives a surreal experience. The 6D thereat and the giant Jatayu scripture takes us back to the Ramayana era.

Legends of the Jatayu earth’s Center

During the last phase of Lord Rama’s exile period, Ravan’s sister happens to get attracted to the charismatic personality of the Lord. She disguises herself into a beautiful female and proposes to Lord which he denies. Lakshmana cut her nose when she becomes adamant about one of the brothers to marry her. This incident made Demon King Ravan visit the forest where the divine couple was residing along with Lakshman. Ravan was spellbound with the goddess Sita’s beauty and decides to marry her at any cost.

In this process, he deceived a mystical trick and abducted Sita Devi when Rama and Lakshmana were away. On the way towards Lanka, Sita Devi shouts for help in distress, heard by the Jatayu. As an old friend of Lord Rama’s Father, he tries his best to stop the wicked act of Ravan. As Jatayu is old he would not stop the powerful demon king. In the fight Ravan cut both the Jatayu ‘s wings this made him fall to earth. The place where he fell on earth is believed to be Chadayamangalam hills.

The architecture of Jatayu earth’s Center

The Statue of Jatayu is 70 feet tall it is located on the hill at a height of 200 ft and width 150 ft. The place constructed in 2018 by a famous scriptwriter, director, multi-talented artist Rajiv Anchal. The whole place is built in such a way that insinuates the Hindu Epic where the huge Bird fell from the sky while trying to rescue Sita Devi from the demon. The very hill on which the bird fell was reconstructed as Jatayu Earth center and it also represents the safety and honor of the women.

This place is a tribute to women. The main intention of this Center is to bring awareness in the society how to respect and protect the women. In Ramayana, Jatayu sacrificed his life while saving Sita Devi. Similarly, men need to protect women and stand with them for justifies. In fact, the sculpture symbolizes the protection of women and should be free from the harm against them.

The Sculpture spreaders around 15000sqft. The amazing part about the sculpture is inside they have five-layered audiovisual museums of the sculpture. Besides this, there is a mini 6D theater that explains the sculpture. To reach the hill, cable cars are available which provide an amazing few of this place. On this hill, one can see Lord Rama Temple along with the reservoir which has a capacity to store 1.5 million liters of water. Hence here one can see the beautiful artwork of the sculptor Rajiv Anchal. He has taken good care of each every speck of the statue giving a thrilling experience to the visitors.

Are you looking for some fun activities? Then you must visit Adventure Rock Hill which is the second hill. Even here they have Audiovisual museums as well. Besides this one can have fun by playing paint shooting. On the second hill, they have an integrated paintball station. Rifle shooting, chimney climbing along with nature walk which as a long trail route many more. Moreover, if you are looking for some fun and adventure activity, visit this Adventure rock after visiting the Jatayu Rock hill. This place loaded with fun-filled activities.

If you plan to spend a night in the midst forest under the sky, then Elephant Rock Hill welcomes you with an open hand. Here people who want to camp overnight are provided with tents. The highlights of this place are live music, Campfire, and romantic moonlight dinner. On the other hand, they have sky cycling here and also 250 m long zip line zone.

The fourth hill is all about ancient and traditional Siddha rejuvenation. As God’s own country is famous for the Ayurveda, here in the caves one can stay and take the 10 day Siddha rejuvenation package if you want. Also called the Heli Tour Hill. Therefore, if you are interested then opt for the Helicopter where you get a chance to have an aerial view the entire place. Moreover, this Helicopter ride provides a breathing view of the place.

Jatayu is a sculptural marvel with a strong social message related to the great Indian epic Ramayan. Besides, this place offers many fun-filled and adventure activities. However, instead of just making it a day tour plan to stay overnight and enjoy the live music under the moonlight along with campfire. Happy traveling! 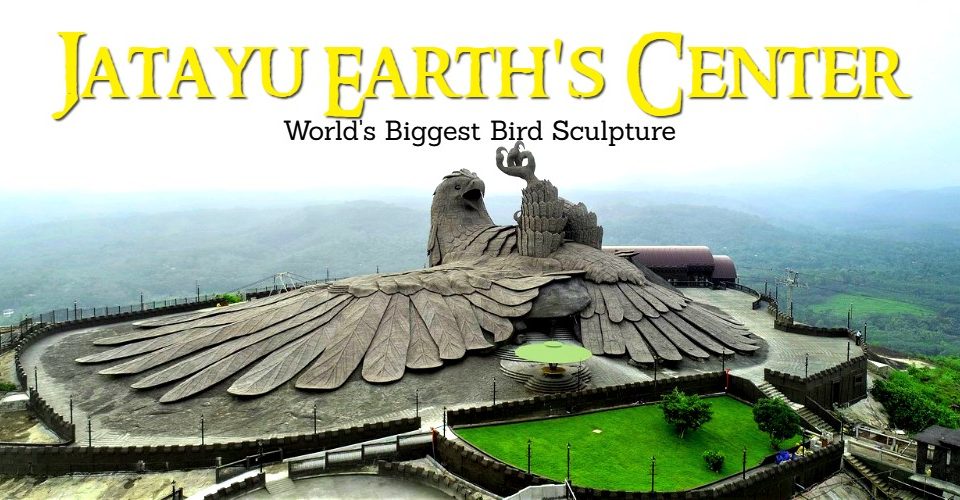 God’s own country Kerala, renowned throughout the world for its beauty and the backwaters. One of the top tourist destinations in India. Yearly millions of tourists […]
Do you like it?1
Read more