The capital of Vijayanagar Empire – Hampi is the most beautiful Hindu Kingdom Capital ever built. Because of its geographical location of having Tungabhadra River on one side and mountains on all 3 sides, it was the perfect place to be declared as a capital of Vijaynagar Empire. From its rustic beauty to its marvelous architecture everything in Hampi is a sight to behold and it will be in your memory for a longer period of time. It defines the word perfect since it is the perfect culmination of natural beauty and man made architecture; it is a village and temple town in the state of Karnataka.

Built more than the area of 25 sq km this giant capital of Vijayanagar Empire is filled with stone carvings, fortificated structure, rocky hills and mesmerizing view of the paddy field from the top of its hills. Yes, there are beautiful paddy fields in the town of Hampi for all the nature lovers and budding photographers to enjoy.

The wind of history will shiver you from inside as soon as you enter the beautiful town of Hampi since at every turn there is something to look at which is more than just a sightseeing it is the beautiful culmination of history which is lying around every corner of Hampi.

Hampi has been declared as a UNESCO World Heritage Site and it contains more than 500 monuments inside it and each of them has a charm of its own.

But since if you don’t have time to visit all of them. Here are the must visit places in Hampi.

One of the oldest in the city of ruins, this temple was built during the 7th century. The temple is on the banks of the River Tungabhadra and has a fantastic design and architecture. Over so many years and because of the changing rule of so many kings, a number of additions and expansions had been constructed in the form of pillars and small rooms. The temple is one of the gems of this place and was built of brick and mortar. The idols of Lord Shiva are attractive and overall this place is an important site of pilgrimage for Shaivites. The present temple is also almost in ruins but still in use. 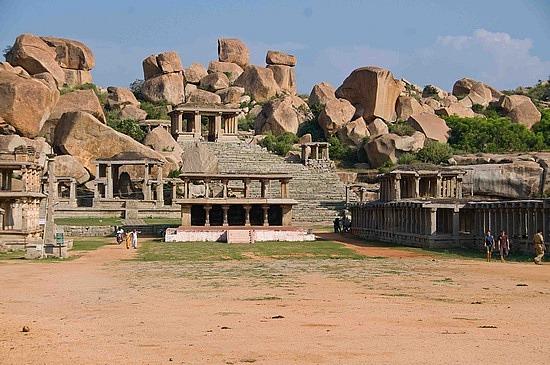 This is the central place of the city of ruins and also known as the Matunga Hills. The peak of this hill is a place from where you can enjoy breathtaking views of sunset and sunrise and also some of the most splendorous views of the city. On the southern part is the Tungabhadra River and on top is the famous Veerbhadra Temple. This temple is dedicated to the incarnation of Shiva known as Veerbhadra. On another side is the Achutya Raya Temple and last is the Hampi Bazar. This old market is the starting point for people who come here for trekking.

Giant stables for the giant Elephants shows the brutal animal strength in the armies of this Hindu empire since the stables are perfect incarnation of the carvings which they used to do during that period of time and what an excellent site to visit since this will give you a hint of what it would have been like during that time. 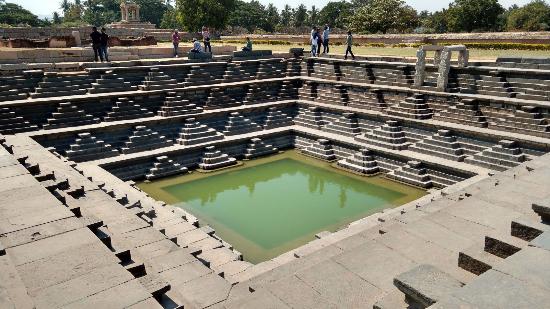 The stepped tank is also known as the Pushkarani in Hampi. Because of its design, it is evident that this place was once a royal pride. This place has a resemblance with a number of typical Rajasthani stepped tanks and as you stand here you will be able to take a view of the surrounding areas very well. Also, there are quite a large number of stone temples, buildings and monuments surrounding this place. Trekkers also find interest over here. It is perfect for photography during sunrise and sunset so it should be visited during that time only.

Best time to visit Hampi is from October to February as the temperature is good and consistent throughout the day. You can also visit here during the monsoon season, but you have to be careful on the boulders as they become quite slippery. Avoid visiting Hampi in summers.

If you are visiting during the peak tourist season reach there as soon as possible to beat the crowd since it gets really crowded during tourist seasons. You can reach here as early as 8:30 AM.

Hampi is 350 km away from the city of Bangalore and the closest railway station is Hospet which is 13 km away from this heritage site. There are many frequent buses which run from Hospet to Hampi. The nearest airport is 3 hours away which is Hubli Airport.

With this amazing guide, you must be intrigued to visit Hampi so why wait? Book your tickets to Hampi and visit this destination which has been ranked 2nd on NYT for “Place to visit in 2019“. It will surely be a memorable journey and the most different experience of your life since there is nothing in this world like Hampi.

Studying in college currently, Kislay was born in Azamgarh. A solo travelling fanatic with the passion of always exploring new destinations. If you do not find him at his home searching about next destination then he is probably trying to hitchhike to his next stop. Currently lost in the story of wanderers and just waiting to start his own journey. A big fan of football and desire to eat every street food in India.