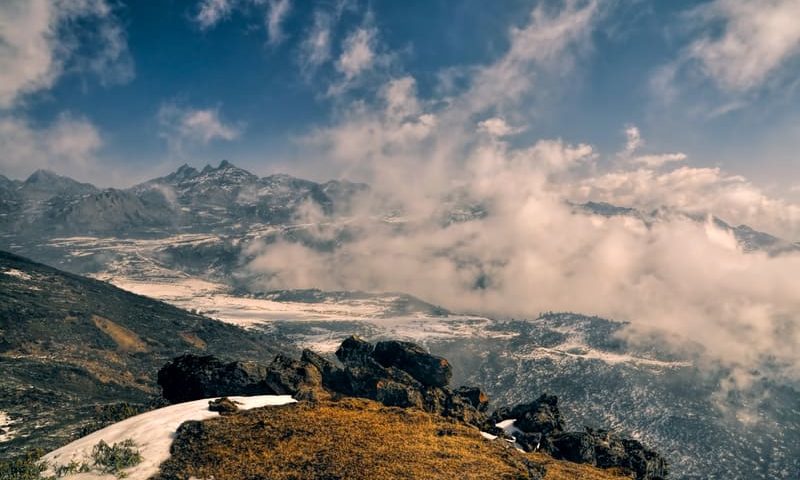 After the stupendous Majuli Islands in Assam, my heart was set that there are more such offbeat places in the North East that deserve to be explored. I wanted to see more suck quirky yet untouched beauties that would be etched in my memories forever. I was looking for a place that wasn’t in anyone’s bucket list, but it should be. My search led me to the Ziro Valley.

The valley is also a UNESCO world heritage site, as it is brimming with a unique culture and wonderful sceneries.

I reached Hapoli- which is the main commercial area of the valley, a little after 12 noon. I was instantly gratified by the fresh air and the smiling faces of the natives. They seemed so welcoming and hospitable towards me- an outsider who just wanted to know more.

The valley is about 16 hours away from Guwahati. From there, there are serval buses and jeeps that go to Naharlagun. Naharlagun is the closest station to Ziro, and any hired cab would be willing to take you from there.

Things To Do in Ziro Valley

The best thing to do here is just walking around them in any of the Apatani dominated areas. The Apatani people are mainly spread over five villages in the valley- Hong, Hari, Bula, Baro, and Siiro. These little hamlets pack so much of indigenous culture in them, that it is worthwhile to just go walk around and chat with the locals.

As I walked around Hari village, I saw that the houses were still built with woods and were perched atop a stilt. The houses are also built very close to each other. This practice was adopted because of the continuous attacks from the neighbouring tribes.

As I walked around, I noticed small details about their culture. There was a man with a lot of tattoos who sat and told me a lot of fun anecdotes. I was truly mesmerised to see the famous nose plugs that the women wear in this region.

The man with tattoos told me of a simpler time when the world was not invaded by modernity and technology. Talking to him I had lost the track of time. It was like I was in his stories and I was living through that.

The vastly spread rice farms are the staple activity of the people in this region. I visited one of the rice farms and was astonished to see the sheer beauty of the lush green paddy that was neatly arranged in layers. They practice terrace cultivation which adds so much more to the beauty of the landscape.

I noticed as women with their backs perched, diligently worked to harvest the rice crops. The small streams that randomly yet aesthetically flowed in between the field just heightened the charm.

The fun part is that these fields are also the area where they fish. The fishes can be found in those streams. The Apatanis are extremely rooted in their culture. They still practice sustainable farming and use organic fertilisers.

The next day, I decided to actually explore the more commercial side of the valley. I also realised market places are one of the best places to actually gain some insights about the culture of the place. Like- In Jaipur, their culture is depicted through the abundance of the various colourful long skirts that every shop has.

As I reached the market, I was immediately captivated by the interesting items that were being sold here. I could see dried rats, frogs, meat steaks, ferns, Tapyo salt, bamboo shoots among many other such weird items. There were also items of daily use. I noticed that all these daily use items were made up of either bamboos or some kind of organic material. This itself hints at how the locals believe in sustainable development and refuse to use anything that might harm the environment. The items are also packed in leaves instead of plastics, and the locals carry it in a wicker basket. I felt this was a simple yet genius idea.

After this cultural trip, I wanted to now enjoy a trip down to the beauteous landscapes. I wanted to see the beauty of the valley which the locals so enjoyed. As I reached the viewpoint I was stunned to see that it is even more beautiful than my guide had told me. The hilltop gives the most amazing view of the Old town of the valley. The gorgeous little town is seen perfectly along with a view of the terrace rice farms, beautiful misty mountains, and a dense evergreen forest. I could stand here all day, but also, I had to move on to experience more of this awe-inducing town.

This is the place of worship for the Apatani Tribe. The tribe, true to its roots worships Donyi, which is the sun, Polo which is the moon and Abotani- who was their ancestor. These temples are a sanctum of peace and calmness. Mystic chants filled the whole place as I sat there in devotion. There is a mass gathering every Sunday for the villagers. The large temples are located mainly in Hija, Hong and Hari villages

After this soul cleansing experience, I had to bid adieu to this lovely valley of Ziro. If one has some extra days, then one can easily visit other places in Ziro like the pine farms, which are also extremely unique and beautiful. But time was not my friend this time. I had left these natural forests and head back to the concrete jungles in which I dwell.

The valley is beautiful throughout the year. It actually has a different charm through the different seasons. It is really fun during the Myoko festival, wherein the locals participate in a grand community feast, and the priests perform mystical rituals.

Their harvest festival during the month of July called Dree is also a unique thing to witness. The locals participate in a cultural festival where the traditional dance is showcased brilliantly.

P.s- The best time to visit this valley is during September when the Ziro Festival of Music is held. It is a celebration of music and culture and people from all over the world attend this fun festival.