Jodhpur city was named after its founder Rao Jodha who constructed this beautiful city in the year 1459. Earlier known as Marwar, it is the second largest city in the state of Rajasthan. Also known as Sun City, it has many mesmerizing palaces and forts for which numerous tourists visit this place every year from all over the world. The major highlights of Jodhpur are Umaid Bhavan Palace, Jaswant Thada, Mandore Garden, Mehrangarh Fort, Government Museum, Osiyan Temple, Pali City, Balsamand Lake and Palace. 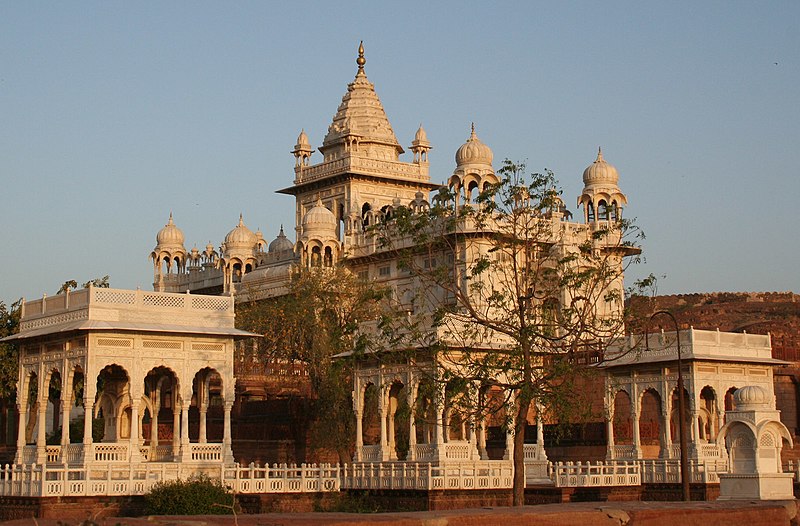 Jaswant Thada was built in memory of Maharaja Jaswant Singh II which houses a multi0tired garden, a lake and gazebos. It is decorated with marvelous designs and was previously used for the cremation of Jodhpur rulers.

Mandore Garden is a beautiful garden made during the reign of King Maldeo. It has a number of lovely floral plants and ancient trees along with a fountain that draws the attention of many tourists. Local fairs like the Nagapanchami and Veer Puri fairs are also organized in Mandore Garden.

The Mehrangarh Fort is situated on a 150 meter high hill and regarded as one of the most charismatic forts in India. It was built by Rao Jodha in the year 1459. The sculptors of this fort give the example of the finest works done by the architectures. The seven gates which are to be crossed to finally reach the fort still bear the marks of the battles fought here in that era. The two major gates are Jayapol and Fattehpol which were constructed to celebrate the victory over rivals.

The Umaid Bhavan Palace was built by Maharaja Umaid Singh for the welfare of the people. There are three hundred and forty seven rooms in the palace and is decorated by an Edwardian architect. The palace also reflects of Indo-Saracenic architecture and is made out with chittar sandstone, which is the most striking feature of the palace.

The Osiyan Temple of Jodhpur city is a Jain temple known for its beautiful designs. It attracts many devotees from far flung area to come and offer prayers here.

The Pali City is an old historical place housing the Somnath and Naulakha temples. Named after the Palliwal Brahmins, this place is visited by a large number of people for the exquisite architechture of its temples.

The Government Museum of Jodhpur is very famous and situated in the Umaid Public Gardens. The museum houses a number of textiles, weapons, crafts, portraits of the bygone era. The city of Jodhpur also offers you a palace named as Balsamand Palace which is beautifully carved and a lake in front of it with the same name.

A Bustling Delhi Market Tour: The Most Colourful And Fascinating Markets In Delhi