The year is 5 BC, the simple workers of the city of Lothal are returning from their work, as they cool off in the great bath, which is located in the midst of this bustling city. Women are all out of their homes buying colourful bangles, or necklaces with semiprecious gemstones- the entire time is different. Life is simple, everyone is happy and satisfied.

This kind of simple life is now hard to remember. To this of times without mobile phones or inertness can even be mind boggling to come. Yet, this is how India was many years ago.

The ASI has managed to excavate many such sites which has enabled us to know what kind of life our ancestors led. These sites are absolutely magical, and you will be transported in time many many years ago, as you try and make sense of how the world worked without modern technology which we have today.

These amazing list of archaeological sites in India are a must see for every single person, to understand the rich history of India:

One of the most famous archaeological sites in India, Lothal now in Gujarat was one of the most researched parts of Indus Valley Civilisation. The site is an absolute gold mine and is full of amazing historical artefacts from the era of the Indus Valley civilization. The excavation of this site started as early as 1955 by the ASI.

Now, this rustic ancient place is open to tourists willing to take a dive into their history books and explore the realm of one of the oldest civilisations in the world. The artefacts are kept in the Archaeological Museum which is located right next to the site. These antiquities truly weave a story has to how life must have been during those times. So much information that is now there about the civilisation has come from this very site.  As you walk around you find parts of wells, or stairs or even houses are strewn around.

This extremely popular site is located in Gujarat and is also part of the Indus Valley Civilisation. It is among the top five most prominent sites of the civilisation and innumerable amounts of artefacts have been unearthed from this site. As the excavation started, items like seals, beads, gold, silver, pottery and many other things were found which all shed a light on the kind of lifestyle and life that existed during that time.

Each artefact fact has its own story to tell- like the carvings on the seals hint at some kind of a ritualistic function, and the beads hint at the kind of materials that were available during that time. There have also been pieces of evidence of an underground drainage system and a stadium that was unearthed in this very site. Dholavira is a site that is often mentioned in the history textbooks and plays a very significant role in the making of India.

The famous kingdom of the equally famous kind Harshavardhan actually deals with a history that began much before the rule of its king. It is said to have been established from the 6thy century BC and has artefacts that talk about the reign of the Haryanka dynasty of Magadha, Maurya Empire, Kushnas, Gupta Empire and Delhi Sultanates. Owing to such a rich history, this wonderful place is also filled with amazing discoveries like- Jaina figures, bowls, dishes, terracotta sculptures and even statues of Parvati, Sita, Vishnu, and many others.

This place is a paradise for people interested in culture and history. A simple walk around this site will give you so much knowledge of a time that has now ceased to exist.

Spread over a humungous 200 acre, the Mehrauli Archaeological Park in Delhi is an absolute wonder. Located right adjacent to the popular and beautiful Qutub Minar, this site is a must visit for the tourists looking to delve into the rich history of this city.

Delhi itself is a historic city, with many kingdoms merging from here. The park now has 100 historically important monuments all of which have tall tales to tell anyone who is willing to give them some time. Reverberating with a unique kind of energy, this the place to be at if you want to turn back time to the earlier eras.

This particular area was under occupation for 1000 years, and in Delhi, this is the only area which has been inhabited for so many years.

On the site, you can visit monuments like Tomb of Balban, which is historic since this was the first time in India when a true arch and a true dome was built. Don’t forget to click quaint pictures of yourself on the steep well that will make you look as if you were from that very era itself.

This amazing discovery by the ASI in Haryana has certainly not received the kind of acclaim that it should have. It was found in 1963 in the Hisar District and upon further examination, it was established to be the largest known city in the famous Indus Valley civilisation. It is also said to be larger and more ancient than cities like Harappa and Mohenjodaro. Such is the importance and significance of this site.

Exploring this huge ancient settlement is like walking through an open-air museum. Off late archaeologists also have found a skeleton which is said to me about 4,500 years old. As you roam around this site you will be able to visualise how things must have been at that time. This site lets you use your own imagination and provides the perfect landscape for you to chart that history out.

This extremely recent discovery took place in 2014 when a research team was sent to the village of Khopadi. In front of them, they found a magnificent 3,000 years old habitation that belonged to the Iron Age.

This discovery was an absolute revelation, as items like black and red potteries, slipware and colourful motifs were found, all of which are helpful in rediscovering a time gone by. The village is actually hardly populated- and a lot of them have theories about the past.

This wonderful archaeological site is located by the banks of the River Nag, which further reiterates the fact that most of the civilisations popped up in a search for a proper water source.

The evolution of Hastinapura is evident through the different layers which the ASI managed to unearth. This amazing archaeological marvel is a haven for history lovers and more anyone who is interested in being transported to five different eras all starkly different from each other, yet equally enriching and important to the making of present-day India.

At first, you will see the artefacts of a time when agriculture was the way of life. This was the agricultural phase. After that, artefacts, hinting at the inception of ceramic factories and industries were discovered which made up the second phase. In the third phase, the advent of mud bricks and more advanced wall constructions were discovered.

As you move towards the last two phases, you will be able to see the connection, as the fourth phase was all about sculptures, jewels, while the fifth phase has artefacts like coins made of copper and silver.

This beautiful chronology of artefacts and events brings so much life to this place, that you will be mesmerized and transported back in the times.

The shocking fact about archaeological sites in India is that most of them belong to the Northern part of India or the Western part. It was only in 2010, that Singadivakkam in Tamil Nadu was discovered and the history of the South came into the limelight.

The artefacts found from this site was traced back to 80,000 years ago and the site itself is an absolute treat to walk around. Historic objects like stone tools and axes along with other ancient tools and machines were found. Still, relatively unknown and unexplored research is still on this fascinating site.

From huge mounds too big brick wells, in Kalinangan you will forget the modern world as you take this intense plunge into a world that has now been forgotten. The excavations here are done in such a way that it almost feels like a deserted township. There are crevices and steep wells all in good enough shape. Located in the historic state of Rajasthan, this site distinct from the other sites because of its fire altars that shed more light on what the civilisation was like. It is also said to have the world’s first plough field.

Kalibagan is an absolute delight for history lovers, and it really does put many things under the radar and helps in establishing the kind of culture that existed here at that time.

This wonderful site actually painted a picture of the periods before 600 BC to 1100 AD. Upon exaction, it was found out that the site was once a brick fortification, but eventually, the discovery of artefacts like amulets, copper, beads, stones like garnet, chert, amethyst, and many other, sounds and even antimony rods suggested that this place was once a town brimming with life and energy.   Apparently, the city had a unique triangular shape and actually traces the entire journey of how different eras used different colours for pottery.

If you are interested you can also view some excellent sculptures that belong to the Gupta empire.

Undertaken in 1958, this site is a truly interesting find. Once you visit this place you will realise how this mesmerising site went through different cultures. The fascinating parts are, that these cultures are identified chronological, by the layers in which the artefacts are found buried under the ground.

It was found that this town belonged to the Indus Valley as well, evidenced by the Harappan pottery workshop and the several cups, vases, dishes, beds and many more which all resembled the style of the Harappan civilization. Peak into this realm and take a look at all these ancient artefacts that are thousands and thousands of years old. 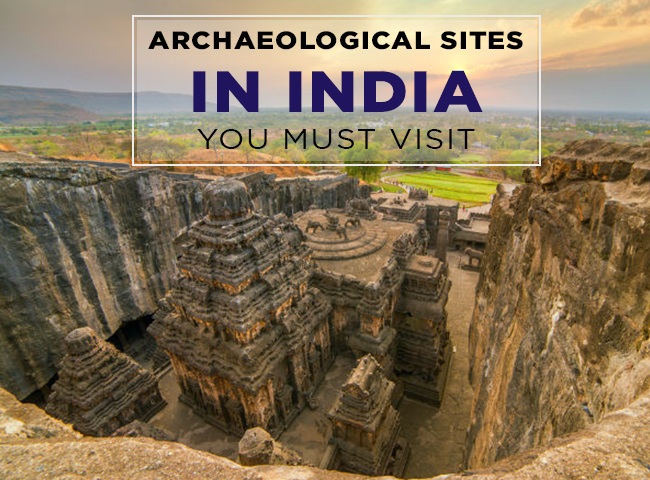 Turning The Time Back: The Best Archaeological Sites In India

The year is 5 BC, the simple workers of the city of Lothal are returning from their work, as they cool off in the great bath, […]
Do you like it?0
Read more