Sandakphu: Stairway To A Snowy Solitude 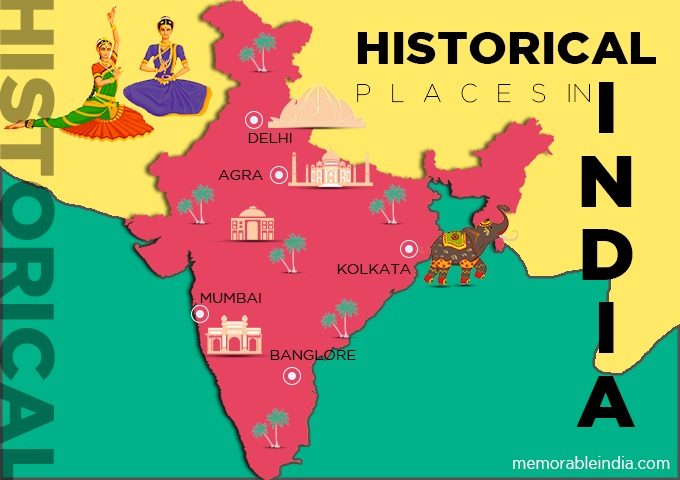 India is a country that drips of history and culture from every corner. From its Mughal rulers to it’s Golden Era, India has gone through several different phases of history, which has made this country so wholesome and fascinating. Through our list we take a look at the marvellous historically relevant sites you must visit in India:

Qutub Minar is the testament to the rich history and culture that reside in India. The beautiful and elegant structure was built during the Delhi Sultanate and now rests proudly at the heart of the capital city.

It is one of the tallest creations in the history of India and every citizen has a soft spot for this marvels red sandstone structure. The aesthetically pleasing Iranian architecture and made this minaret a favourite among the tourists too. The walls of the minaret reverberate with the tales and stories of the past. There are calligraphic inscriptions engraved on the walls written in Parso- Arabic and Nagari characters.

It was built by the famous Qutub Ud- Din- Aibak, who started the slave dynasty in India.

The minaret is open for tourists from 7 am to 5 pm. Entry fees for Indians are rupees 10, and for a foreigner, it goes up to 250 rupees.

Rajasthan is the state of the mighty and rich kingdoms of India. The Rajputs found their footing here, and so did many other rulers, who contributed to making this state of the most historically rich state.

The gorgeous Amer Fort sits proudly atop a hill called the Cheel ka Teela, which overlooks the Maota Lake.

The resplendent fort is vibrating with culture and history, and the marvellous architecture is truly stunning to look at. The shining red sandstone gives it a royal vibe, and the marble adds that luxurious finesse.

The Amer fort has some magical elements to it. The Diwan-i-khaas and the Diwan-i-aam are one of the most luxurious locations in the fort. You will be captivating by the sheer beauty of these two places. Don’t forget to sit the Sheesh Mahal, which makes this Fort even more mystical. Sheesh, Mahal is the core of this Fort and attracts a lot of visitors.

There are many secret routes in the Fort, and your guide will make sure to show you all of them. As you move around the Fort you will feel that you are back in the era of the kings and queens that once resided here.

One of the secret routes takes you to a long path that finally leads you to the Jaigarh Fort.

The Amer Fort is also a great way of learning the strategies that the kings and knights had applied to keep their enemies at bay.

The Ajanta and Ellora Caves are actually architectural wonders. These amazing caves redefine the notions of beauty. These caves are essentially carved out of rocks, but what makes them so special and mystical, is the fact that they are made from a single rock. The single rock was carved to create these caves, which now house wonderful rock-cut sculptures and traditional Indian art.

The caves and the artefacts inside the caves depict the life of Buddha. The murals and sculptures are awe-inducing and will make you stand and gape for hours. As you walk through the caves, you can only gasp and wonder at how amazingly talented the ancient Indians architects must have been to create this masterpiece.

This unique temple has been attracting serval visitors because of the way it has been structured. The Konark Temple in Odisha is devoted to the Sun God and is one of the most beautifully constructed and designed temple. The temple exudes heavy influences from the Kalinga style of architecture, especially with its chariot and pillars that give that Kalinga touch to the temple.

The whole temple complex is reminiscent of a chariot with wheels and horses pulling it. The temple’s walls are beautifully carved and each of those carvings holds a symbolic meaning.

The temple is at its most radiant when the sun slowly begins to set and covers this beauty in a golden hue. The entire temple gets painted but the setting sun’s light, as the night starts to fall. The scene is wonderful and must not be missed. The Konark Temple has also been featured in the Top 7 wonders of India.

This tower located Madhya Pradesh is an alluring example of the mystical aura that Buddhist style of architecture encompasses. The Sanchi Stupa is a historically and religiously relevant site for Buddhists, and for tourists, it is a marvel to look at.

The relics of Lord Buddha is said to have been rooted within the dome-shaped structure of the stupa.

The Stupa was famously commissioned by Ashoka of the Mauryan Dynasty and reflects the ideologies go both Buddha and Ashoka.

The stupa was built to spread the teaching son Buddha far and wide, and inculcate the idea of peace and ahimsa (non-violence). The Sanchi Stupa is the perfect symbol for the life led by King Ashoka, and the wonderfully engraved teachings of Buddha heightens its allure.

This temple in Madhya Pradesh has not only found its way to the UNESCO’s list of World Heritage Site but has also shown what the culture of India used to be. It shows the culture that was once there in India, and how different it was at that time.

The Khajuraho temples were built by the Chandelas, and the complex hosts a group of Hindu and Jain temples. The temples reflect one ideology in a big way- Acceptance. Through the carvings, the temple preaches the idea of unity in diversity and how important it is to accept all forms of religions. It is and still remains to be a path-breaking and ahead of its time.

The temples are a deep dive in the long-gone culture of India. It is a great place to understand and learn the traditional Hindu and Jain values, and how they are being interested in today’s day and age.

This Mughal Masterpiece is a testimony to the amazing architectural wonders that occurred in India during the Mughal era. Built at the peak of the Mughal Empire, Shah Jahan’s Lal Quila took nine years to complete. The fort is living proof of the powers and might of the Empire. The red walls of the fort echo the bravery of the Mughal Rule and have over time become a political symbol.

Located in the midst of the country’s capital in Delhi, the independence day parade takes place right in front of it every year. Such is the value of this monument. The Fort is adorned with the tales of the Mughal era, and the heavy influence of the Persian architecture is visible. The Fort hosts many important and historically significant rooms like Diwan-i-aam, Diwan-i-Khas, Mumtaz Mahal, Rang Mahal, and many others. Walking and exploring this wonderful Fort is like taking a trip down to the realms of the Mughals.

This gorgeous and elegant palace was built by the famous British architect Henry Irwin in 1912. The palace resides at the heart of the city and is an architectural marvel. The moment you see the exterior of this palace, you will be flabbergasted at the architectural beauty that lies in front of you.

Built in the Indo Saracenic style, the palace has amazing intricate designs. The interior rooms of the palace are exceedingly beautiful and it will take a hard time for you to come back to reality from visiting such royalty. You can visualise the history and the events that used to take place here. From the grand wars to the stories about the kings and queens, Mysore Palace has it all. Get ready to be enchanted by the great stories and even intricately decorated rooms that are sure to leave you gasping.

This place reeks of one of the most tragic and momentous happenings in the history of India. The walls of this public garden talked about the day when hundreds of peaceful people found themselves massacred at the hands of the British Officer, General Dyer as India watched in silence. Situated in the middle of Amritsar, Jallianwala Bagh is only a short walk from the magnificent Golden Temple. You can laze around or just walk around this wonderful park.

One of the best ways to revisit that fateful day of 13th April 1919, is by catching the light and sound show that takes place here. The splendid show will take you back to that day, and make you feel as if you were right there in the midst of the battle as the innocents died. You can see history leap out from your history textbooks and come alive right in front of you.

The best time to visit this park is during the winter months, as you can relinquish in the pleasant weather and maybe even have a family picnic in the afternoon.

Few people have described this monument to be even prettier and eerier than the Taj Mahal. Another testament of the Mughal Era, this historical building is reminiscent of the royalty and wealth that once flowed into India. The entry to this gorgeous palace is marked by the highest gateway in the world called the Buland Darwaza.

When you are finally able to move your eyes away from this marvellous gateway, you can find yourself in the ancient city that was once the capital city of Jalaluddin Akbar. You will get goosebumps as you walk through the different monuments and royal courts that make this place so magical. It is like walking straight into your history books.

The famous Sufi Saint- Salim Chisti had also made this city his home.